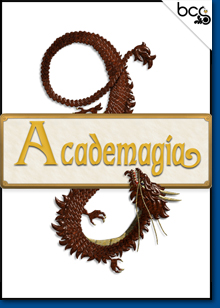 Academagia: The Making of Mages is an indie title by Black Chicken Studios. It is a life simulation game where it puts players into a situation of a young growing wizard. It plays as a text-based game with a Harry Potter like theme. In fact, the similarities between the Harry Potter world and that of Academagia are plentiful. Many concepts, ideas etc within the game can be seen in parallel to that of the Harry Potter series. If you are in love with the fantasy wizard and magician world, Academagia might be the perfect match for you. END_OF_DOCUMENT_TOKEN_TO_BE_REPLACED

Avencast: Rise of the Mage (in this review, avencast would be used instead of the whole long title), is an action Role-Playing Game (ARPG). Action in the sense that you can hack and slash anywhere you want, and role playing in the sense where you, well, role play as the character or perhaps the hero? I have yet to complete Avencast (50% completed already) but I doubt the game will have too much of surprises which are fantastic or will overwhelmed me. I must say though that Avencast developers sure surprise gamers as they are hidden talents. Never heard of them but the game they just produced sure is good.

Almost every RPG have a strong storyline backing it. Avencast however only has a mediocre one. Very straightforward, you ought to know what to expect in the end and is pretty much like the hero killing the bad guy. You start with an introduction on how you are born (well not actually born but like, you know found or something) and then how you arrive in this magical castle called “Avencast”. Very peaceful at first and the game goes around teaching you the basics etc. Smart move by the developers as it masks the tutorial as somewhat like a quest. You learn how to fight etc and soon you found your way doing a examination to prove your worth. Upon completing it and arriving back at the castle, you, expecting the castle to be as peaceful and merry, was wrong. It was in complete ruins and monsters are everywhere. That is when your true adventure begins and the storyline develops even further and deeper. I quote from Avencast’s official site:

“In the magic kingdom of Aldgarth, demons tore up a dimension portal and invaded your academy… Now a forgotten demon army is about to descend on your world… Descend into the depths of a sunken civilisation…. Fight the mighty Demon Marshal Morgath, forged from the crystals of the God…and uncover the secret of your past!” ~Avencast.com Game > Story

Yeah that is pretty much it. Nothing really special nor breathtaking but still, enough to make you get into the game and be part of it.