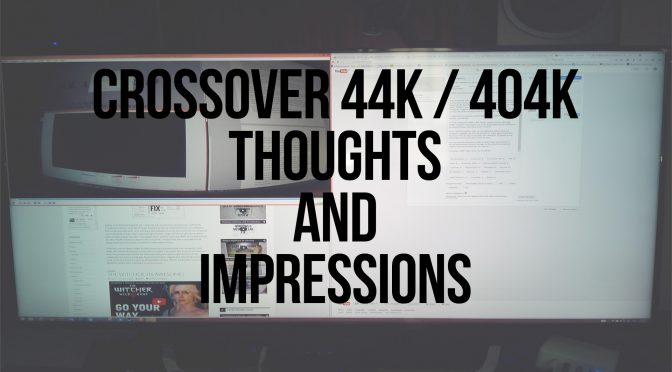 Iâ€™ve purchased a 40 inch 4K (3840 x 2160) resolution monitor 3 months ago and have been using it frequently for both work and play. I did a quick unboxing and overview about 2 months ago promising an update. Finally, here are some of my thoughts on using a 40 inch 4K monitor as a computer display and the monitor itself in particular. END_OF_DOCUMENT_TOKEN_TO_BE_REPLACED Its Fruit Ninja, the movie. Many video games are getting some hollywood attention. One of the more recent and perhaps exciting talks are on the Assassin Creed movie. Oh yeah that does sounds fantastically awesome. Put that aside, we have some fruit slicing and ninja action going on here. Know Fruit Ninja? That mobile game where you destroy precious fruits to get points and how you should evade the bombs at all times? We now have a movie for it, a movie trailer at least. END_OF_DOCUMENT_TOKEN_TO_BE_REPLACED

We have all sorts and kinds of gamers: pro gamers, competitive gamer, casual gamer, role playing gamers and so on. Today, we have an elite role playing arcade champion gamer. Iâ€™ve once been to my local arcade and witness someone who completely owned one of the shooting game. If I remembered correctly it was the game called Rambo or something like that. At one point he was talking on the phone and shooting with one hand. And as you expect, right before the enemy would appear fully he would have already shot them down. Amazing? Well, yes indeed unless you see this amazing gamer at work. END_OF_DOCUMENT_TOKEN_TO_BE_REPLACED

Yet another live action adaptation of the extremely popular game Angry Birds. Yes it is official, Angry Birds is affecting our lives bit by bit. The world is flooded with things related to Angry Birds. We have birthday cakes, cushions, soft toys, casing designs and many many more. From the creators that made the hilarious parody of the iPhone 4G incident comes Angry Birds The Movie. Read on to watch the trailer of the action packed, emotional and dramatic blockbuster. END_OF_DOCUMENT_TOKEN_TO_BE_REPLACED

Defense of the Ancients (DotA) is an extremely popular custom map made using the Warcraft 3 engine. Yes, the Warcraft 3 engine and the game itself is old, very old but the custom map DotA lives on up till today. Widely popular and still is popular all around the world. You get competitions of global scale (i.e. World Cyber Games) and many other newer games being built on the concept that made DotA so addictive. There other games out there such as Heroes of Newerth, HoN, League of Legends, LoL and probably the upcoming DotA 2 (by Valve by the way) all based on heroes and those 3 lanes of awesomeness. Anyways like all popular games you expect to see insane modifications and external uses of them. We’ve got the Angry Birds comedy, Metal Gear Solid and Modern Warfare short parody films and so on. This time around we have a DotA movie, a movie of the life of TerrorBlade, a hero within the game. END_OF_DOCUMENT_TOKEN_TO_BE_REPLACED

I stumbled upon the video at some forums and the first thing that came into my mind after looking at the title was: “Hey isn’t Mark Leung that guy that made some RPG parody video or something?” Yup, I went into the channel, looked at his past videos and indeed, it is the guy back in 2006 that made the rather popular “College Saga”. Really awesome humorous stuff he have there. I was surprised to actually see that he now have a full fledged RPG game released, should be extremely funny as well. Anyways, here it is, the game trailer for his RPG game called: “Mark Leung: Revenge of the Bitch”, read on for the video. END_OF_DOCUMENT_TOKEN_TO_BE_REPLACED

If you play current gen mobile games you should have tried angry birds or at least heard of it. The game is immense and is now serving over a million of mobile users across several platforms such as the iOS as well as the Android. It is an amazingly simple yet addictive game where it tells the story of the battle between the pigs and birds. Apparently these pigs stole the eggs of the birds and they are pissed off, thus they fight them trying to get back the eggs. This popular game has resulted in several reactions from plush toys, pillow cases, artworks and even birthday cakes. Now we have a live action short skit of a peace treaty between the birds and the pigs. Read on for the video. END_OF_DOCUMENT_TOKEN_TO_BE_REPLACED