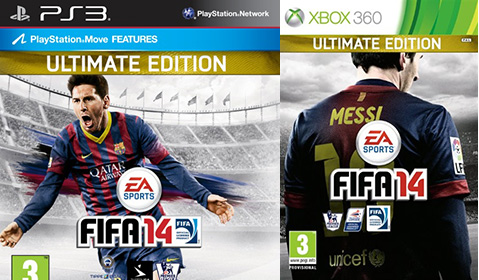 FIFA 14 marks yet another transitioning phase of EA Sportsâ€™ FIFA franchise. There are the â€œnext-genâ€ and â€œcurrent-genâ€ branches of the game. This happened for quite some time for the PC version (08 to 10). It basically housed an aged engine that was absolutely abysmal when compared to the â€œnext-genâ€ console version then. This time around with the Playstation 4 and Xbox One coming year end, EA Sports have yet again branched out the engines in a way that the PS4 and XBone have the newer engine. With that said, current-gen FIFA 14 is still an improvement over FIFA 13. Read on for some of my thoughts of the game.

For quite some time already, the graphics of the FIFA franchise has been stagnant. Besides introducing some new animations here and there, it is basically the same engine that powers the previous 2 to 3 versions. You have your usual kit changes here and there, menu redesign and stuff that donâ€™t really concern the match gameplay experience much. As such, Iâ€™ll be focusing more on the core gameplay aspect of the game which is the match engine. There are some few things that I like but as usual, there are also things that make the game frustrating at times.

Upon picking up and playing your very first match in FIFA 14, you will notice a huge change in the way players move. There is this new momentum and weight system that I absolutely love. It adds a whole new level of realism to the game. It does also improve on the gamerâ€™s skill set of dribbling and defending. The system basically works in a way that penalizes your player should you make too much sudden directional changes. 180 and 90 degree sharp turns on the run will cause your player to lose control of the ball and rightfully so. This complements the 360 dribbling system that was implemented in the previous versions. In order for you to be a successful and effective dribbler, you will have to trick your opponent to go a different direction. This is done with subtle movement of the analog stick, ensuring that your playerâ€™s balance is maintained and thus keeping the ball closer to yourself.

Players now take time to get to their top speed as much as they take time to slow down to change directions. Defending also becomes a little more skill based as you must have the reaction time to mimic your opponentâ€™s dribbling movements. Commit slightly in one direction and you will find yourself totally out of position. This slightly helps the complaints about players simply holding on to the contain button. You can punish them a little more with this new system in place.

The shooting system has been reworked and has now improved tremendously in both realism as well as smoothness. In previous versions, players will slide into positions before the shooting animation takes over. This has produced some unrealistic shots in extremely difficult angles and positioning. This time around, FIFA 14 introduced a true shooting system whereby the players will now adjust their footing before taking a shot. Expect terrible shots if the ball is in awkward positions for your player. Players now do take some time to get into positions for their shot but because of that, shots look much more believable and the outcome are much more satisfying.

FIFA 14 brings back what was once in FIFA 11 and 12, removed in 13, and improved it. Previously, you could shield the ball simply by not moving and holding on to the sprint button. Your player will then religiously use his body to protect the ball from the opponent. This time around, your player will too protect the ball but you also have the choice of moving while shielding. Now this brings in a new aspect of gameplay mechanics as it is now more intuitive and smooth to do rolls and holding plays. You can now draw a defender or two towards you as you pick a pass or simply roll them in a different direction. The physical aspect of the game has also been slightly improved. You do see the importance of having higher strength as your players can brush opponents aside in 50-50 chances. It does help a little in curbing pace abuse but there are just some other issues that make the through lob pass a little more broken (explained later).

For the majority who use assisted and semi-assisted passing, you will notice a slight change in the passing system. There is a little more control given to the gamer as you can now aim your passes better and the game will more accurately reproduce whatever you have conceptualized in your mind. Passing power does affect the power of the passes a little more now, allowing you to hit the ball into spaces you canâ€™t before. This is yet another subtle improvement that makes the game much more enjoyable.

The AI of FIFA 14 is disappointing, especially for the defending part of the game. Now attacking wise the AI does make more runs here and there but as for the defending, they can never keep up with the runs. Diagonal runs are just so easily executed as if the defender was sleeping. Through balls get through easily and the defenders just feel so stagnant and dead, almost as if they were constantly ball watching throughout the match. There is also this problem whereby lofted through balls are extremely difficult to deal with as your defenders canâ€™t seem to track and follow them. Switching to them gives a second whereby your player comes to a complete halt, causing them to lose acceleration and giving away positioning. It is sad to say that the broken AI helps facilitate pace abusers and their through balls. EA took a step forward in introducing the momentum system as well as improving the physical aspect of the gameplay. With this though, they have taken another two steps back with the pure stupidity and ignorance of the AIâ€™s defending.

If you play a bit of FIFA, you should understand the term of â€œlockingâ€. Locking basically describes the situation when the player you have selected would move towards the ball (in the air or ground) and you will be able to execute different actions once locked on. Now there seems to be some adjustment to the locking mechanic to give you a little more freedom especially for air balls. Do expect corners whereby your defenders totally stay still in position while your opponent gets locked on for a free header. Technically you can move your player towards where the ball is header but without the lock this becomes extremely difficult and isnâ€™t a guarantee to work. There are times when even when you get your player into position, the lock isnâ€™t there and your player will not head or perform any action.

Overall, FIFA 14 is an improvement and as usual, EA Sports never fails to amaze with just simple additions and tweaks to the gameplay. The game is certainly not perfect but it is definitely more entertaining and fun as compared to before. I canâ€™t wait for the â€œnext-genâ€ version and hopefully it is another step forward.