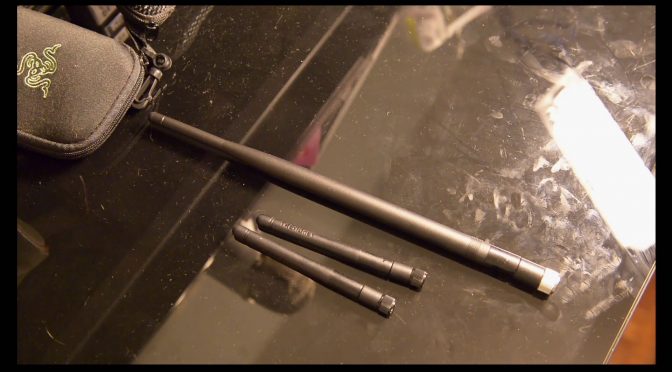 Being restricted to solely using wireless for my internet connection, Iâ€™ve been spending much time finding ways to improve my wireless connection and speed. Iâ€™ve tried many configurations, placing routers here and there and wherever I had cables running to. After a few days of testing, Iâ€™ve gotten the most optimum position for the placement of my wireless router and configuration. Not wanting to spend too much money, I decided against upgrading my wireless router but instead searched for other cheaper improvements that I can try out. Iâ€™ve then decided to change the wireless antennas of my wireless PCI adapter.

First and foremost, letâ€™s get things clear. Iâ€™m totally ignorant and foolish in the field of networking. I do, however, know basic things such as physical cable being the only and best solution for the best connection and speed. With that said Iâ€™m still trying to learn more about stuff such as WAN to LAN throughput, how the hardware of the router affects speed and stability and so on. That is one of the other reason why I decided against getting a better more expensive router as Iâ€™m not sure how it will help my case. With all that said, I do know that more powerful antennas will allow better reach and stability. As for speed, I guess with a stronger and more stable link it would naturally be faster. Correct me if Iâ€™m wrong, my testing methodology is flawed all over but the results are as presented.

There are a total of 2 access points that I tested with. One is located a floor below and the other is in the room next to mine (separated by about 2 walls). The routers being used are similar and they are the Buffalo WZR-HP-G300NH running on firmware DD-WRT v24-sp2 (rev. 18777). The names of the access point will be called â€œdd-wrtâ€ and â€œdd-wrt 2â€ with the latter being the one in the room next to mine. The wireless adapter that I am using is the TRENDnet TEW-623PI N300 Wireless PCI Adapter. The adapter uses 3 x RP-SMA 2 dBi antennas. The eBay ones Iâ€™ve bought are claimed by the sellers to be rated at 10 dBi. However, because the eBay antennas are too fat, Iâ€™ve only managed to squeeze two of them on the adapter while keeping one original in the middle.

For each test, I used Speedtest.net and connected to the same host. The same test is carried out thrice and the average is used for comparison.Â  All the tests are carried out within the same time period to minimize the effect of the varying network load of the service provider which can drastically affect the results. Local network is kept to the minimum to ensure accuracy of results. Instead of comparing the numerical values which makes little sense as it differs from person to person, a percentage is calculated.

There is indeed an improvement in the internet speed when using the eBay antennas. The difference is slightly more significant when the access point is further away. The upload speeds are surprisingly worse off but even so is too insignificant a difference to really matter. As mentioned previously, the testing method is extremely simple and thus there might be some other factors affecting the results even when testing in a supposedly â€œidenticalâ€ environment. I guess this is a slight upgrade that you can try out should you be on a wireless connection. Besides, it doesnâ€™t cost much; Iâ€™ve purchased the antennas at $3 USD per piece. There are more reputable branded ones out there but those cost quite a bit more. If youâ€™re more of the hands on person, you can simply DIY yourself antennas which can be both effective and fun should you do it right.

Do not be deceived by the number of bars the windows WiFi indicator shows you. The signal strength reported for both access points for me are at maximum 5 bars. The results obviously proved otherwise. So if youâ€™re looking to improve your WiFi connection perhaps you can try this inexpensive solution first.