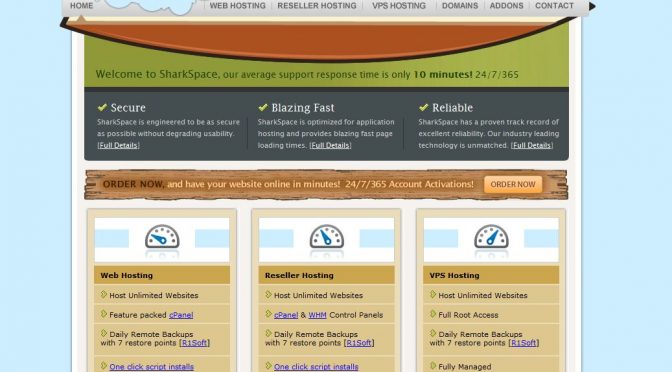 I did mention in my previous review of my current host that I would do a follow up when 6 months passed. Here I am doing just that and I must say that so far everything has been fantastic. SharkSpace, for those who donâ€™t know who or what they are, is a hosting company that SwiftWorld is currently being hosted by. This is a follow up review of the host and is based on the shared hosting services provided by the host. END_OF_DOCUMENT_TOKEN_TO_BE_REPLACED

I’ve recently (around 2 weeks ago) shifted host. The main reason for doing so is due to the poor uptime of my previous host. That was not all, the loading time of the server is totally horrendous. I’ve tried optimizing to the best of my ability but the time taken to simply get a response from the server itself is way too long. That plus the free time I had since my examinations were finally over, resulted in the shift to a new host.

I search long and hard, looking for a host that is affordable and reliable. No point paying a dollar a month and then the server shuts down after a month. Reading forums and other people’s reviews, I decided to give SharkSpace webhosting a try. SharkSpace started in the year 2004, so I guess they do have some experience in this field. Their pricing is fantastically reasonable as well. To add on, they have an ongoing 50% off life discount that is currently available for certain plans. I’ll review the host based on first impression, my experience so far with their support and of course whether the server is performing for the price or the promises they made. END_OF_DOCUMENT_TOKEN_TO_BE_REPLACED

I was/is/am horrified by what just happened. I saw some posts regarding Advertlets domain being expired and not renewed. Oh great, being curious I went on their site and indeed it is true. The domain had expired and Josh (owner of Advertlets, I think) did not renew it! To make it worst, whoever had Advertlets advertisement code within their site would be redirected to the holding site for the domain. Great, now people who went on to my site the past few minutes (luckily) thinks my site is merely a scam or in-active crappy virus site. This mistake is HUGE. Forget the $1 ruckus made by Nuffnang, forget the support tickets not being answered, and forget the cheques not being delivered or signed. Why? Because this is way WAAAY more serious than the past few mistakes and problems. Who would be angry? Both the publishers and the advertisers. And if you add both of them up you get everyone. Everyone gets affected and everyone ought to be angry with Advertlets.

Why would Publishers be angry?

Why shouldn’t they be angry when their sites get redirected to some holding scam like page? Publishers’ own visitors themselves might lose trust in the site they go to. This especially applies on new visitors. What about the big sites that publishes Advertlets? END_OF_DOCUMENT_TOKEN_TO_BE_REPLACED

That is so right! Now you can easily make your photos talk by using a software that enables you to synchronize your speech with the photo. Easily make your photo’s mouth etc move to mimic a person talking in real life! How awesome is that! And the company is giving away free copies for bloggers who blog about this in their own blog! Yay! Here is a demo of how the thing works. Pretty cool huh!

Official site visit it for more information on how you can get your free software!

There is also another free software that is almost the same in terms of concept and idea.Â  Check out the site! Fix8

Why do I say so? That advertisers using Advertlets to carry out their advertisement campaigns are paying for practically nothing? Well, not really nothing, but shall we use the term, ineffective? Just take a look at some blogs around the net that uses Advertlets as a source of revenue to see what I mean (Screencast of what I mean below). Since Advertlets work on a pay per impression system (also on per click as well), I will assume that advertisers pay for ad campaigns based on how much impressions they want (obvious actually). However, the thing is that if you take a look at what some publishers are doing, what the advertisers pay for is not what they get. Pictures show a thousand words while videos show a thousand pictures thus a million of words? Take a look:

Right. So now we know the situation let us talk about it. Almost 3 or more advertisements repeats itself. That would mean the advertisers are paying let us say 1000 impressions, but all they get is? 1000 / 4 (easier to calculate) = 250 impressions! In other words, advertisers are actually paying 4 times to price per 1000 impressions. I tried reading through the faqs, terms of conditions etc but nothing touches on this subject. I don’t know but it sure looks to be quick money for publishers but as for advertisers? Ineffective and a waste of money.

Both Advertlets and Nuffnang are companies and places of revenue for webmasters, bloggers, especially in the region of Asia (specifically Malaysia and Singapore). Though they both aim the provide users with an alternative source of income through their website, they both run on different system. It may seem rather unclear on how different Nuffnang and Advertlets are but I hope after reading my article you will have a clearer view on which is “better” for you.

Recently there have been several complaints by bloggers on Nuffnang on why they have not been receiving advertisement offers for several weeks or months. These outbursts of anger also include them being angry on how they realized that they advertised Nuffnang without being paid. Almost all of those that complained switched to Advertlets as they no longer want to wait anymore. However, on the other end bloggers that are currently getting the advertisement offers showed their disagreement and debated back. All these debating sure sound intense but there is only one suggestion to both ends. If you do not receive your advertisement offers, so be it. Nuffnang is not for you. For those who have received offers over and over again, good for you.