Today, I present to you a review of TorchLight. Not the physical object that helps shine light in dark places, but a game named somewhat after it. TorchLight is a action role-playing game, similar to that of perhaps diablo and FATE. The designers and developers of the game are part of those two games I mentioned, therefore they are extremely similar in terms of game concept and design. The brief outline of the game is basically you choosing a character, taking some quests, go into dungeons, kill the monsters, come back out, finish the quest, repeat. Sounds boringly repetitive? Nah, it is totally addictive. Don’t say I didn’t warn you. 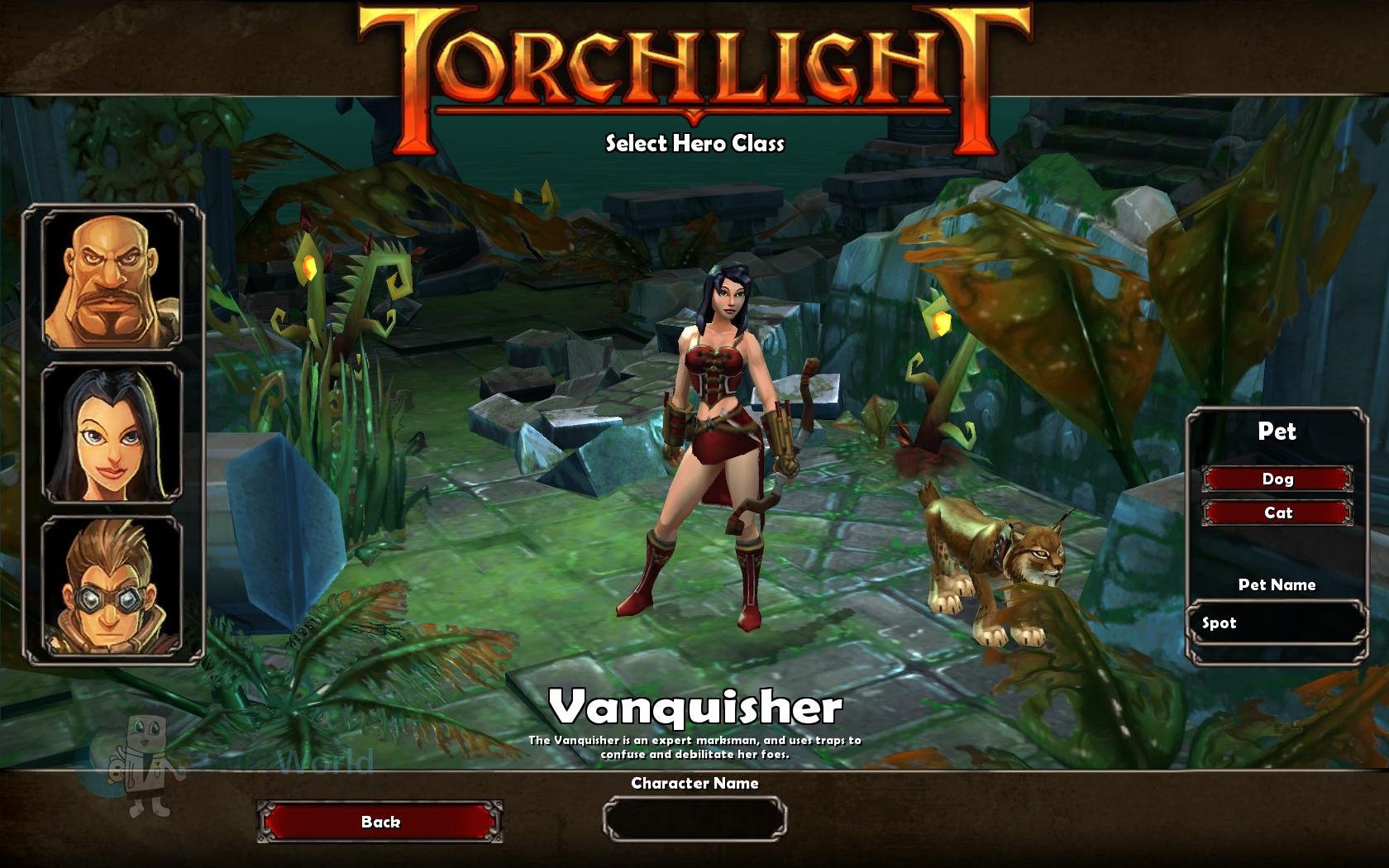 I quote from the official site: “The adventure is set in the mining settlement of Torchlight, a boomtown founded on the discovery of rich veins of Ember â€“ a rare and mysterious ore with the power to enchant or corrupt all that it contacts. This corruptive power may have dire consequences however, and players set out into the nearby mountains and depths below to discover the full extent of Emberâ€™s influence on the civilizations that have come before.” So basically you are a adventurer that finds out about a big villain later on that is the cause and source of corruption and you are out to stop him. Simple enough. 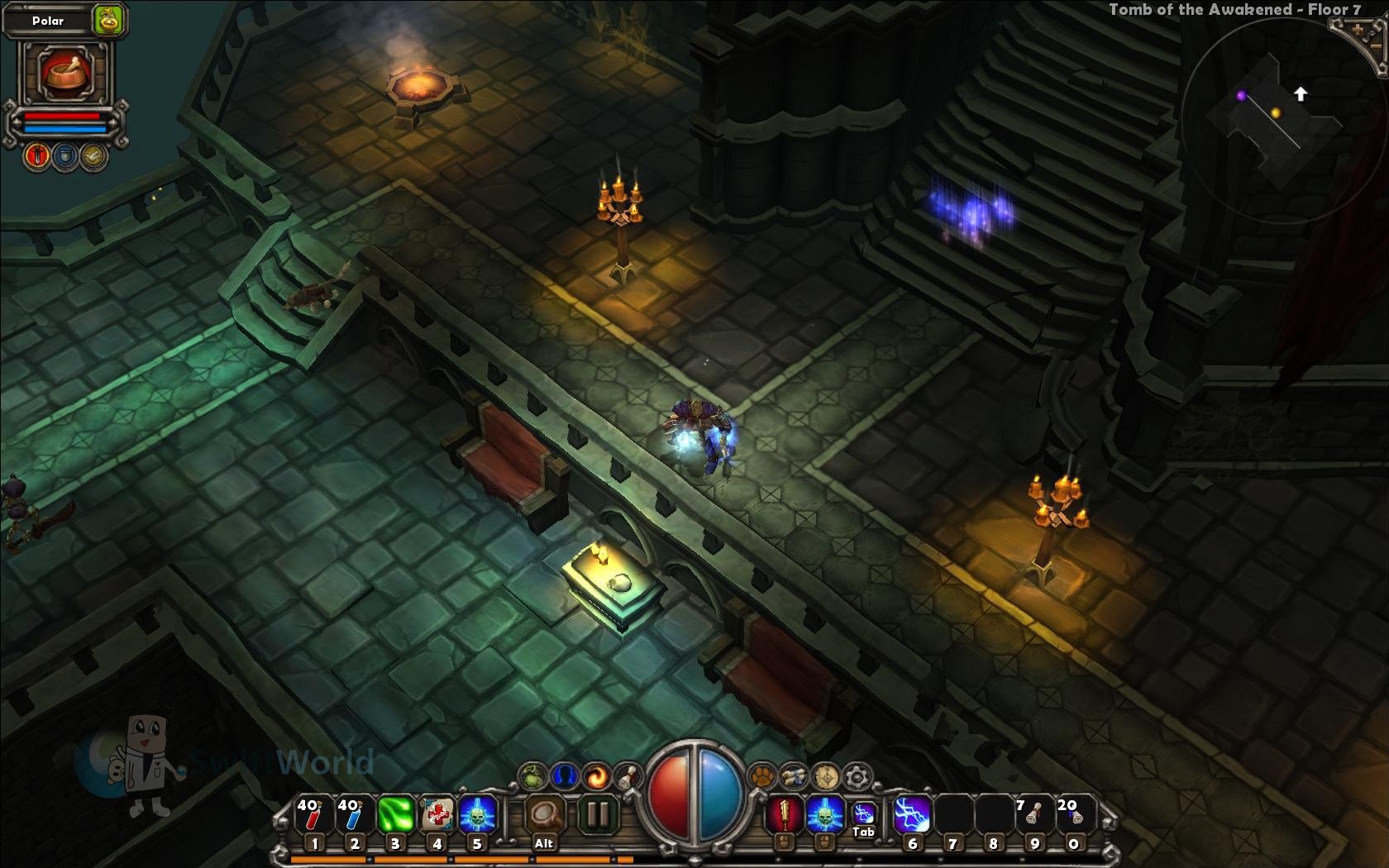 You have 3 different classes to choose from. They are the Destroyer, Vanquisher and Alchemist. Sounds awesome? Yes they are. Basically the Destroyer is the warrior class, Vanquisher the ranged combat like archer and stuff and Alchemist is the mage or magic user. All the different classes have their own pros and cons, for example the Alchemist does good area damage but has low health and so on. Choose a class that suits your playing style, or if you like you can try all of them and see which suits you the best. Besides all the classes have some badass looking items that make you feel so much more powerful just by looking at your character equips.

From the three different classes, there are several equipment paths you can choose from. For example the warrior can equip weapons such as pole arms or swords. You can also choose from 2 handed weapons or rather 1 handed weapon with a shield or rather you can dual wield. There are many weapons, armors etc to choose from. All of which can be equipped on any of the classes for they are not class locked. Instead, they have stat requirements which might be unfavourable to the different classes. So you can be a mage holding a sword or a warrior holding a wand. 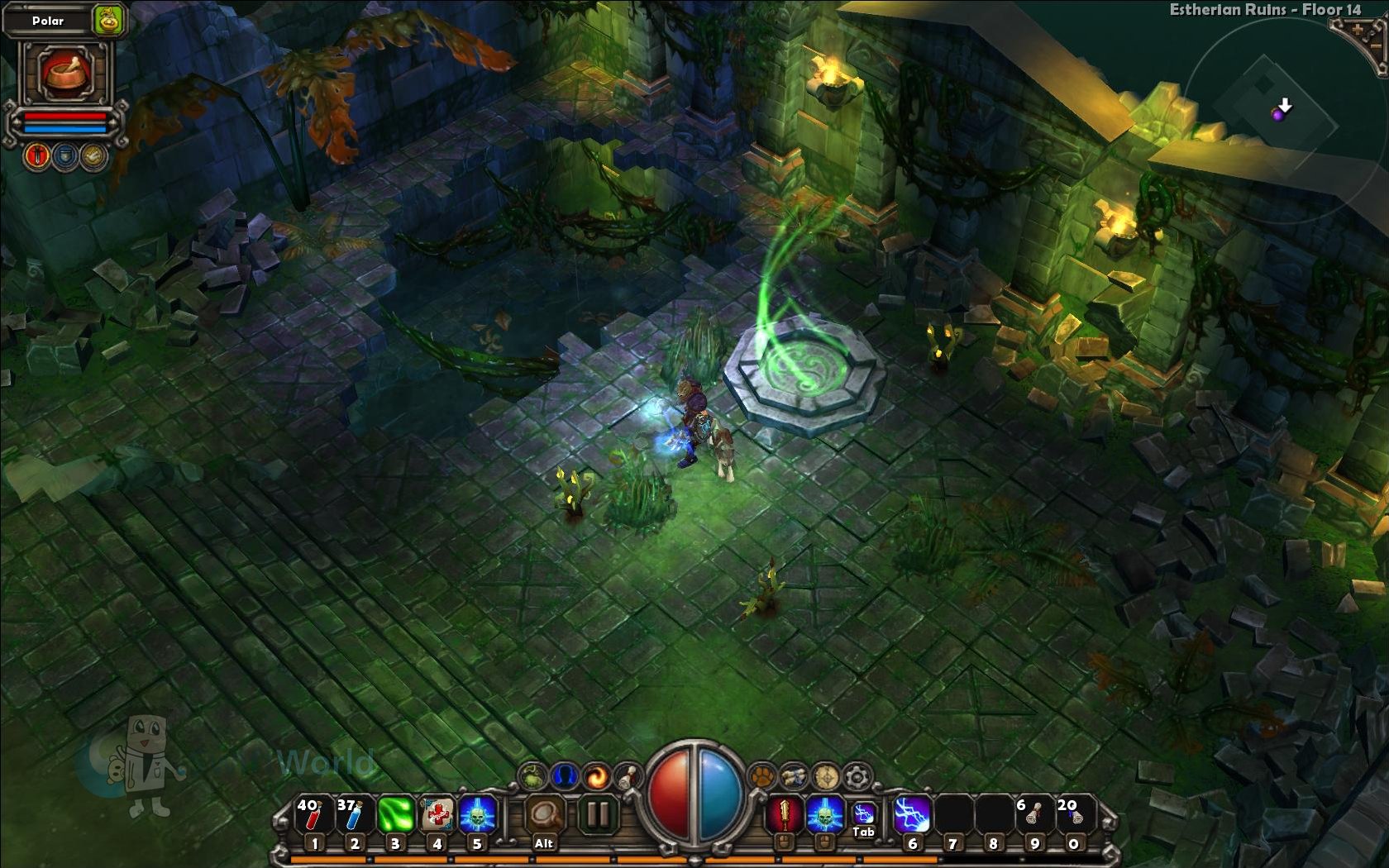 All the classes have different skills you can choose from. Mix and match to make your playing time the most enjoyable one. Some skills however are a little unbalanced in my opinion. For example there is a skill for the Alchemist that is so good, you just have to spam it to get through any boss or level (for medium difficulty). The Alchemist also has some real sexy area damage spells which other classes lack. So sometimes some people might think the Alchemist is a little over powered. But still, all classes are fun to play depending on your style.

The gameplay concept bases strongly on the old formula of action role-playing games. Hack and slash your way through dynamically constructed dungeons (each levels differ from other players because they are generated on the spot). During each level, you get to face some mini-bosses that give you fame or help complete quests upon defeating them. As you proceed deeper into the dungeon, you get to fight with much stronger monsters as well as get the chance of acquiring better drops. After finishing each level, you can go back to town using a town portal scroll and using the same portal to return back to that level at that exact point. You’ll be doing this rather frequently to complete your quests and get new ones. You can also, however, just grind and bash your way through each and every level not caring about the quests. Doesn’t affect much but you might be lacking on the additional free fame and experience points as well as some equipments. 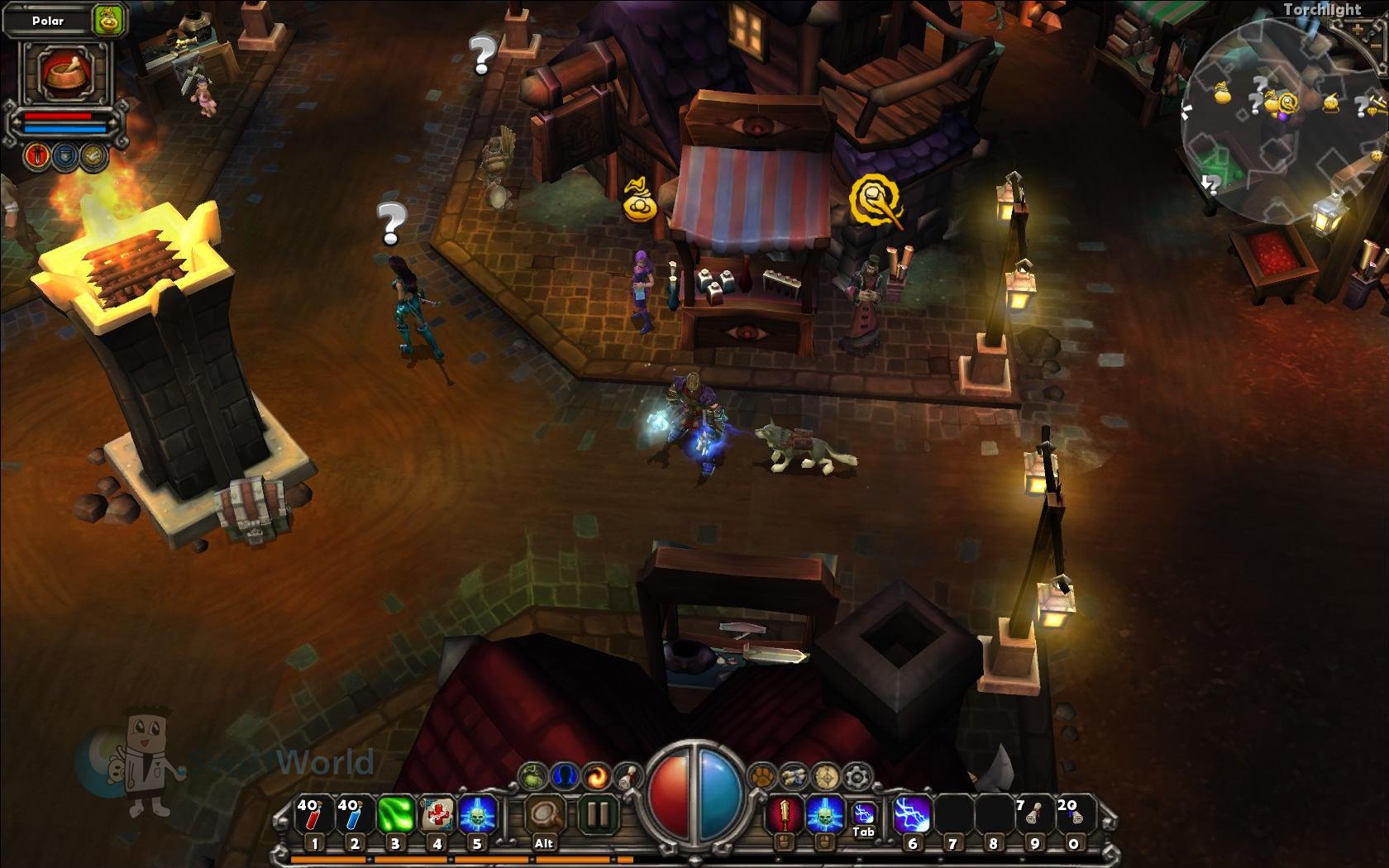 Character development is simple yet deep. You get to choose from 4 core stats to upgrade. You get 5 stat points after each level up and the core stats simply affects your damage or defence. For the Alchemist you upgrade magic to increase your magic damage and Destroyer you upgrade strength which increases physical damage. Skill development is simple as well. Not too much side effects if you add the wrong skill. Just follow what your heart wants. If you think the skill name sounds awesome enough? Just add and see if the animation is as fantastic. Don’t go searching for guides or anything for it will hinder the fun factor that you are going to experience.

With all that said, you have  a pet (either a cat or a dog) that aids you in your adventures. It can help you fight, loot and sell stuff. In addition, you can feed your pet fish (whether is it a cat or dog, you feed fish to it) that will in turn transform them into other creatures for a certain time frame. Some fishes are very useful for they can turn your cute pets into ferocious monsters that wreck havoc in the levels. To acquire fishes, you simply fish in fishing spots. A small tiny mini game has to be played to get the fish. It is very easy and sometimes can be very rewarding. 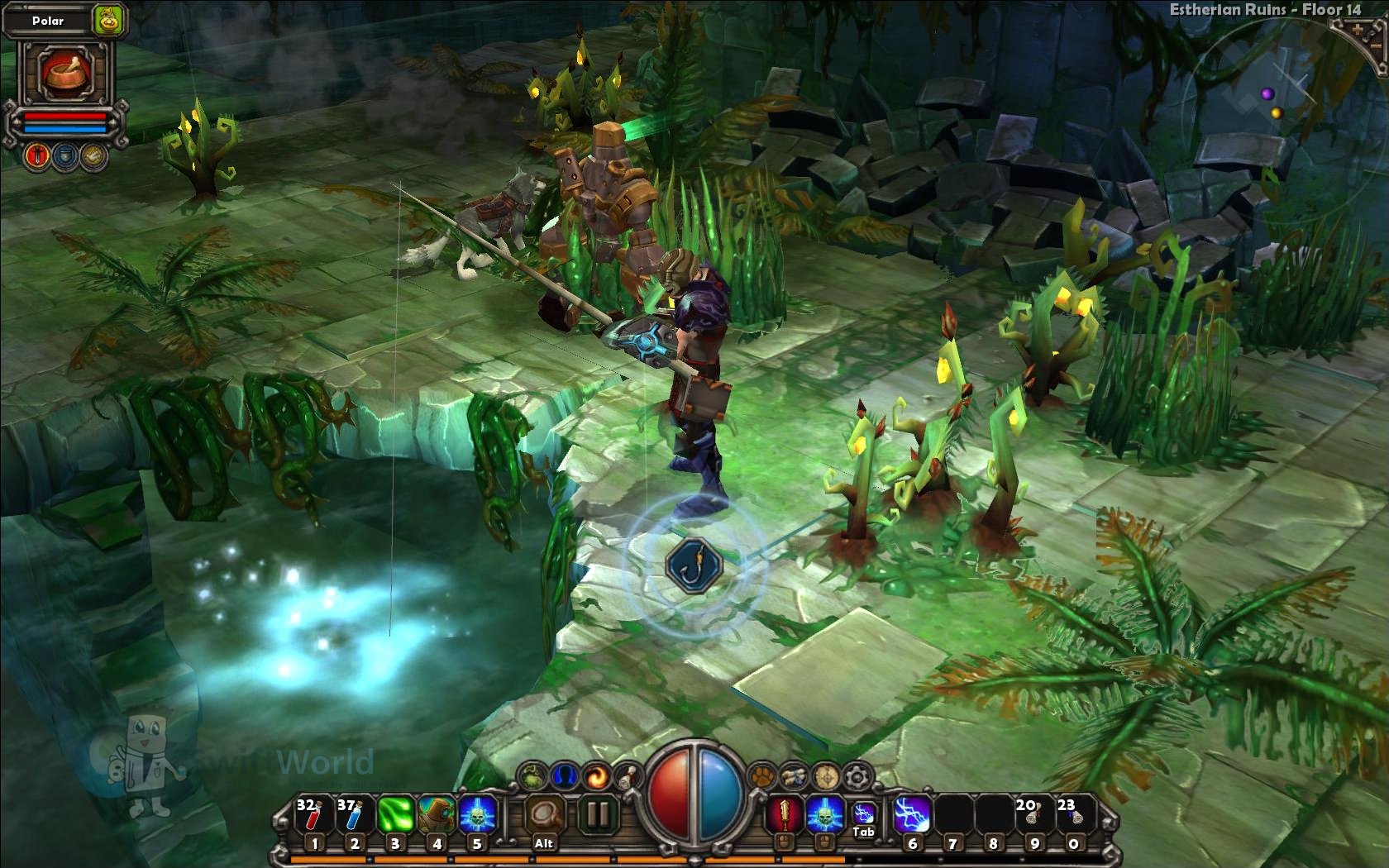 The presentation of the game is beautiful and rich. Environments are richly coloured and monsters all look monstrous. Spell effects are particularly amazing and the way they’re animated give you a feeling of power and control. The music is enriching and definitely helps bring up the atmosphere of the different levels and locations. The sound effects for attacks, skills and everything else are also well thought of and executed. For example the sound of killing a group of enemies with one of the area spell is totally awesome and amazing. It is like, PLARGH or something but is amplified according to the number of enemies you killed.

The possibilities of the game is endless. The developers decide to focus very much on community modifications. This means that in due time, many different mods that can offer a whole range of new gameplay stuff such as new weapons, quests etc will be available as soon as the community starts working on it. Therefore for the price tag of $19.90 USD, it is totally worth it.

http://www.google.com.sg/url?sa=t&source=web&ct=res&cd=4&ved=0CBIQFjAD&url=http%3A%2F%2Fwww.torchlightgame.com%2F&ei=w3HsSoe6Jovq6gPz3r3rCw&usg=AFQjCNGP8KMqjrSj1ImTedme9WsosqVvQQ&sig2=GAwAuJZno2iVsel1zL4LCQ
No votes yet.
Please wait...

One thought on “TorchLight Review”