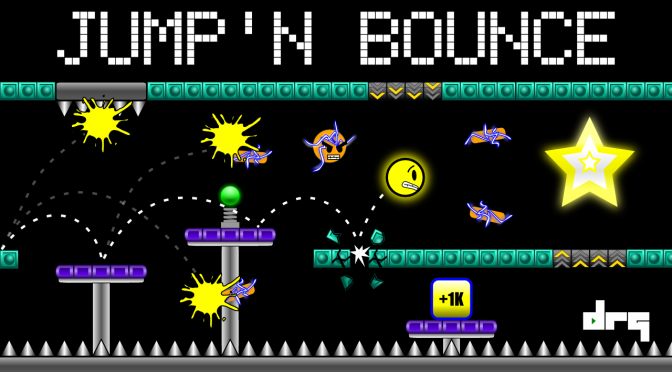 Jumpâ€™n Bounce is an indie retro arcade platformer available for purchase at your local xbox marketplace. The main objective of the game is simple: jump and bounce your way to the finishing point. Of course along the way there are things such as bonus points, lives and so on but you can simply ignore them should you simply want to win. It is a rather simple game (in terms of the idea and concept) with simple retro graphics, but the fun is still there. Simplicity is beauty isnâ€™t it.

There are obstacles to avoid along the way, hitting anyone of them will result in your little bouncing yellow ball being splattered into a gory mess of yellow paint or something. These obstacles include moving hostile foreign objects and tough looking spikes. Avoid them at all cost but feel free to put your cute little bouncing ball in danger when you are trying to get that bonus point securely hidden beneath the numerous treacherous dangerous hostile obstacles.

As it is with many retro arcade games, the main purpose is not only to finish the levels but to finish them with the highest possible score. Each level features a non-scrollable one screen design, allowing you to observe and analyse your surroundings for the possible paths and routes to take in order for you to maximize your score while minimizing the difficulty. Do plan your route before you make a move else you will constantly find yourself in yellow gory mess. You often will start panicking when a hostile object is coming to you, jumping only to find yourself landing in spikes thus it is good to take a look and understand what each level requires first in order to proceed on completing it with lesser difficulties. Like the saying goes, you fail to plan, you plan to fail.

Bonus points are often placed in the most intriguing and seductive positions available on each level. Before reaching each bonus point, you will be facing numerous spikes and hostile objectives moving in such awkward manner that only a ninja can avoid them. Of course no pain no gain; you definitely have to try it out if you are looking to put your name in that highscore board.

Controls are simple, neat and effective. Do note that your ball is already bouncing and will never stop doing so. There are the d-pad directional keys as well as a jump key (double jump available, this key allows you to jump higher than bouncing trajectory with the second jump taking you to greater heights) together with a slam key or something. Not sure what it is called but it simply allows you to force your cute ball into rage, slamming itself down to the ground. This is to be used whenever you find breakable blocks. Destroying these blocks often open up means of getting that elusive extra life or bonus point. You can also use this to keep your ball from bouncing high. With a combination of both the jump and slamming buttons, you can ninja your way through each level effectively.

The difficulty curve is a gradual increase, allowing players to slowly get a hold of the controls and awakening the ninja within themselves. The later few levels are extremely challenging as well, providing a challenge to gamers who would love to test their skills. There are a total of 50 unique levels with 10 within them catering to the hardcore gamers. That is right, finish the first 40 before starting to think about the next 10. Great amount of gameplay for the mere price of 80 points (approx $1).

Pay that dollar and treat yourself to some high quality retro music and sound effects that not only livens up the atmosphere and retroness of the game but also add a pinch of excitement to those already exciting levels. I must say this is a great game for people who love platform games and even more so for retro gamers, it is just a dollar and you get a huge load of fun from it. Would love to see them port it over to maybe the iOS or Android systems, such games are great to play on the go as well.

For a gameplay trailer: