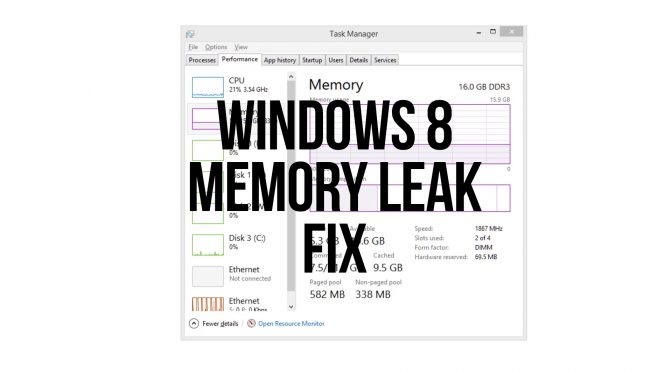 Lately, I started noticing that my computer was extremely unresponsive and barely functional at times. I initially thought that it was due to some kind of virus or malware but using reputable anti-virus software and malware scanners proved that my computer was nothing but clean. I then spotted high memory usage out of completely no where. Upon further inspection, the “non-paged pool” section used up to 90% of my RAM (I had 16 GB of RAM installed). Upon further research, I realize that this is a problem that many faced two years back. Somehow I only realize it now.

This particular problem might be affecting users of motherboard or computers with Killer NIC (network interface controller) installed. You might face it out of no where as well. The problem lies within the Windows Network Data Usage Monitor Driver suffering from memory leakage. Apparently it keeps logging and allocating memory to itself to the point that it takes up all available memory. The fix is basically to turn off the Windows driver from starting.

To turn it off, simply go to your Registry Editor (run regedit.exe) and navigate yourself to this particular registry folder:

Look for the registry called “start” and change the value to “4” in order to stop it from running. Restart your computer and your computer should not face such a problem again!

Hmm really curious as to why only now that I notice this problem. I have been using this motherboard for quite some time already and it is not till now that I find out about this leaking conflicting network drivers. Better late then never I guess. Windows 10 is coming anyways, everyone should upgrade to that (it’s free for genuine owners!)