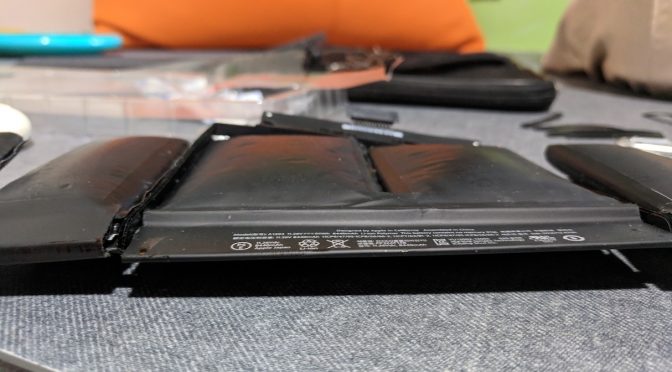 It was some years (about 2 to 2.5 years?) ago that I dropped my Macbook Pro and smashed the screen. I sent it in for repairs at a third-party and when it came back, everything seemed fine. It was not until recently, like months after the fix, did I realize that the touchpad had some problems. It felt unresponsive to clicking, as if there were something stuck and prevented the touch pad from travelling all the way down. It was also then when I realize that the Macbook did not sit flat on a flat surface (basically it was wobbling if you put force on the corners). I thought everything was fine… not until I went to open up the back cover just a month ago did I realize the root cause of all the issues.

Before I get to the root cause, let me explain why I went to open up the back cover. One fine day, the SSD of my drive just happens to “disappear”. There was literally no warning signs or any symptoms that the storage had any issues. I was just turned on the Macbook, and while it was loading the few starting apps the computer just hanged.

My goodness was that a scary time as well. So that explains why I opened up the back cover as with everything computer related, a shutdown and restart or in this case plug out and replugging it back in can sometimes cause miracles. And thankfully the SSD indeed was detected once again after replugging it in (I hope that is the only problem… can’t really afford buying a new laptop at this point of time).

While I was trying to close back the back cover, I realize that it was almost an impossible task. I needed to force the cover down, causing it to warp a little so that I can get access to the holes for the screws to go in. Wait a minute… this isn’t right. I took the cover back off and looked again. Hold up, what is this? The batteries looked like they just had a buffet and they overate to the point where they’re about to puke. I went to Google it up and indeed the batteries were bloated, very bloated in my case.

I went online then to immediately source for a battery and thankfully with the power of China and the internet, OEM batteries are readily available with international shipping. I did my research to see if it was easy to replace it by myself as well. I didn’t want to spend too much time on it and apparently there are many people claiming that it was pretty straightforward. The only difficult part was the removal of the battery due to the double sided tape that holds the battery in place.

The rest of the work is pretty damn straightforward. Simply peel off the double sided tape for the new batteries and slot it back in. Insert back the screws that holds the circuitry of the battery and that’s it. Yes I do know the “proper” way of doing things is to remove everything including the motherboard and all the other components. That said, the reason why people sometimes do that is because of using some liquid compound to dissolve the glue that is sticking the battery onto the chassis. I did it the manual way where I used dental floss to try “slice” the tape apart (didn’t really work that well and I resorted to using my hands to pry the batteries when I can get a firm grip onto the battery that is). At the end of the day I’m glad that everything works!

I spent roughlyÂ a total of 2 hours to get everything done. 1.5 hours were probably used trying to pry the old battery apart. I have yet to test the performance of the new third-party battery yet but soon time will tell.

On another note I am now trying to fetch a decent price on this Macbook, I’ve been wanting to upgrade to a newer version for quite some time already… And yes if you’re wondering I do list down all the conditions the Macbook has been through when I’m selling it. It is a dilemma to me whether or not it is worth spending the cash for an upgrade. I only need my Macbook for iOS development (which is far and few in between) and whenever I need to go out to meet clients for whatever activities… Ah to spend or not to spend… the age old modern day first world problem.

I’m glad everything is over and everything turned out just fine. I must say even after so many years this Macbook still performs pretty damn well. The software side of things (Mac OSX) certainly help it go a long way.