Omniball is a pong styled game out for the iPhone and the iPod Touch. The objective of the game is to simply not let the ball go out and gain the most points. It is something like pong yet so different. Basically you have a â€œmatch ringâ€, opponents, paddles and a ball. The match ring is a small circle enclosing the area where the ball is safe. Should the ball leave the borders, the person who lets the ball out loses.

What you have to do is to keep the ball within the circle. A match can be played to up to 4 players including you yourself. Each player gets a colour assigned to him. When the match starts, the ball will first randomly choose the first player to strike the ball. The ball colour will then change randomly to any of the other 4 players colour. Depending on the angle of the bounce, the player, whose colour has been chosen, have to anticipate the position in which he has to bring his paddle to that position to prevent the ball from moving out. However in a high intensity match, it is best to always assume that the colour of the ball is going to be yours, that prevents any lag time from between the ball changing colour and then you reacting 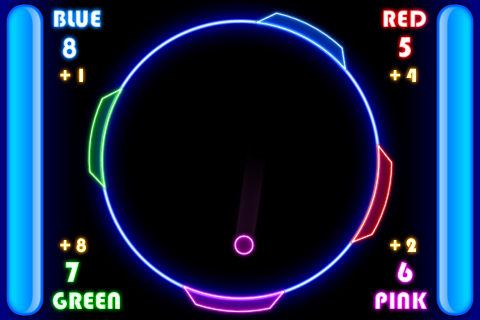 Every time the ball strikes a playerâ€™s paddle (like the line in pong), that player gets a temporary one point. This goes the same for everyone. Within a round, the amount of points that can be awarded to the winner depends on the length of the round and subsequently the number of times the ball is exchanged between each player. Should the player win, the temporary points then become permanent points. His opponent, on the other hand, will have his points minus according to the temporary points of that particular round. Therefore the more exchanges between each player not only mean that there will be more points awarded but also deducted. No pain no gain. There is some strategy involved in the game. You might want to learn the technique of changing angles of the ball and as such trick your opponents. I also found that should the ball slightly touch your paddle, it will go in a rather wide angle, resulting in your opponents scrambling to position their own paddles. That skill is pretty hard to execute anyways, for me at least. For now, just learn how to read the angles of reflection as well as the anticipation of the ball colour.

To control your paddle, you are to swipe your finger up and down at the sides of the screen. There are two given blue bars acting as the controls (I believe). So you basically touch and drag up for anti-clockwise or down for clockwise (different for both the left and right). It takes time to get used to the controls and I myself frequently find it tough to adjust the paddle to the position I want. I mean the controls simply do not feel smooth at first. However, with time I slowly got used to the way it is constructed and match my movement accordingly. There are many ways of using the controls whether you like to use either sides or both. I myself use both sides and basically just have a downwards dragging motion. Left bar to control the anti-clockwise and right to control the clockwise movements. Other than the controls, everything else seems to be in place. The graphics are brightly futuristically made. Simple graphics but sufficient for such a game. The sound effects on the other hand match the futuristic coloured graphics. Everything blends in really well. The only problem I have now is the amount of modes available. It seemed as though the game only features a quick play mode for most games. No level options, difficulties or even things maybe such as powerups? I mean it lacks that cutting edge mode that makes it a fantastic game. Yes it does feature multiplayer options as well. However, what it lacks is perhaps a creative and innovative mode that completes the game as a whole. Maybe a story mode or league mode, just something. Otherwise it is a fun game to pickup and just play with your friends or alone.

The game is now out for $0.99 at your local appstore. Fans of pong or perhaps a casual gamer? You are most likely to love such a game.