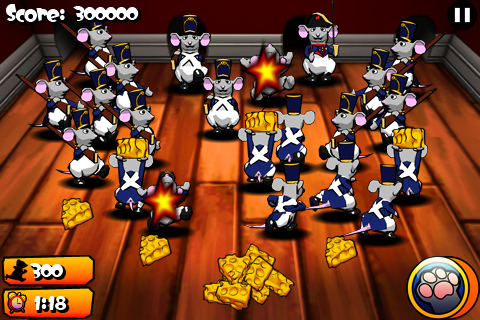 Here I am again with yet another iPhone games round-up review. Today I have with me 3 games and the norsk casino slotzo games, 2 of them being reviewed before but must be reviewed again due to awesome updates and changes. I did review the free version of Sudoku 2 but here I am today to present you the PRO version and a review of it. Hellkid was reviewed back then when it was first released as well but due to several gameplay additions and changes, I have to do the game justice by re-reviewing it. Mice Heist is a new action arcade game that I am about to review. Read on for the reviews of the games.

Sudoku 2 PRO is the premium version of Sudoku 2. The differences between the paid and the free version are mainly these:

These features are great but whether or not to actually pay for them is another problem. Gameplay is as great as ever and even better with the additional features and changes put in place. Extra difficulty settings allow more challenge and raises the addictiveness bar of the game (yes I am now somewhat addicted to Sudoku thanks to the game). It is one of the most polished Sudoku game present in the iTunes appstore to date. But because of its free version which is that awesome as well, I think the PRO version is for those who want to show support for the developers or basically love the game for I strongly believe it is extremely worth it to pay for the premium features. If you find yourself constantly playing the free one, the upgrade is definitely worth it!

Mice Heist, the title says it all. Basically you are to stop the mice from stealing your cheese. This addictive fun and fast paced action arcade game is sure to please both the young and old. The game is extremely simple to pick up and play. All you have to do is to tap on the mouse that appears to stop them from proceeding any nearer to your cheese! There are several types of mice each having their own special ability. For example the cheerleader mice will speed up other miceâ€™s movement and thus have to be stop if you do not want to be caught with mice running at full speed. There are ninja mice as well that dodge your tap and thus require you to tap twice so on and so forth. 3 Difficulty settings simply meant that it will be enjoyable for the lesser skilled to the extreme mice destroyer. The game has a light feel to its graphics and arcade environment due to its sound effects. Overall it is good but if you play too long you will start to feel the stress and weird sensation in your hand. Openfeint enabled is a must for such games as highscores matters the most. Prepare to complete achievements to show off to your other buddies as well! The only downside is that the game starts to become kind of repetitive after the first play-through. Maybe more modes or something might make it a game worthy to be bought by every single person.

This kind of quality gameplay update is simply worthy of praise. It doesnâ€™t introduce many new gameplay elements but new features that actually matters and improves the game. The update introduces new stages as well as the ability to use items within a stage. This new addition not only makes the game more addictive and fun, it also improves the gameplay. The item shop allows you to purchase items that can help you increase/slow down your speed within a stage, give you an extra life etc. There are also new playable characters added in which is thoughtful of the developer to add in making it much more enjoyable. If you have already purchased the game and not updated it, you are seriously missing out a lot. For people contemplating whether to buy it or not, yes it only cost a dollar and the fun you get is worth it.